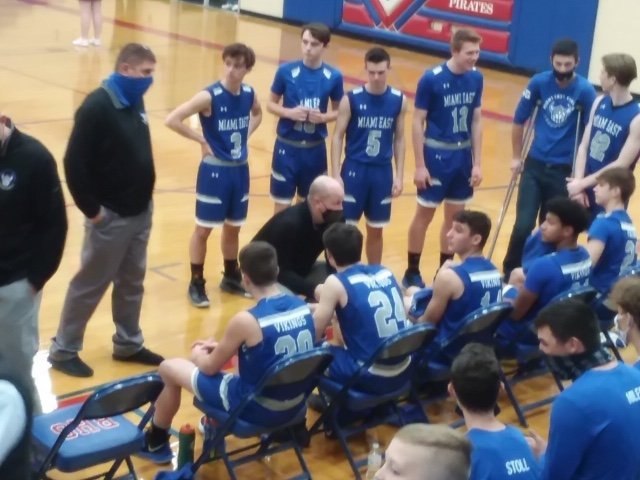 Saturday saw a pair of future Three Rivers Conference foes battle it out in non league Boys Varsity action as Riverside hosted Miami East.  The Vikings started the game out with a 9 point run with Davon Abshire and Nick Prince getting baskets and Wes Enis converting a 3 point play and a basket.  The Pirates would get on the board with a pair of baskets to make it 9-4.  An Abshire basket was followed by a Pirates 3 to make it Vikings 11-7.  The Vikings would go on a 7 point run with a 3 from Prince and baskets by Noah King and Jacob Roeth.  The Pirates would end the first quarter scoring with a pair of free throws.  Vikings 18-9 after 1.
King would start the second quarter scoring with a pair of free throws and the Pirates would do the same.  Vikings 20-11.  Prince would make a 3 for the Vikings while the Pirates would string to gather a trio of baskets.  Vikings 23, Pirates 17.  The two teams would trade baskets with Abshire hitting for the Vikings.  The Vikings would finish up their first half scoring with Abshire and Roeth hitting baskets and the Pirates did the same to close the quarter.  Vikings 29-23 at half.
The Vikings would expand their lead to 11 at the start of the third by putting in the first 5 points, an Abshire basket and a Prince 3.  The Pirates would follow that up with a pair of baskets for a 34-27 Viking lead.  A  Viking 4 point run, Roeth free throw and Prince 3 was matched by the Pirates 38-31 Vikings.  The two teams exchanged baskets with Enis making for the Vikings.  The Vikings would get a 3 from Connor Apple,Vikings 43-33.  A Pirate basket would make it an 8 point game but a Roeth 3 pushed the lead back to 11 for the Vikings 46-35.  A 5 point run by the Pirates finished up their scoring for the quarter while an Enis basket made it a 48-40 Viking lead after 3.
The Viking opened up the 4th with a pair of Roeth free throws and basket and an Enis basket to make it a 14 point game 54-40.  The two teams exchanged baskets with Roeth hitting for the Vikings 56-42.  The Pirates would score 6 of the next 7 points with the Vikings getting an Enis free throw 57-48 Vikings.  The teams exchanged baskets with Abshire hitting for the Vikings 59-50 Vikings.  Another Abshire basket pushed the Viking lead to 11.  The Pirates were not done as an attacking defense garnered them an 8 point run to make it a 3 point game 61-58 Vikings.  The Vikings would salt the game away by hitting 7 of 8 from the line with Enis making 3 and Roeth 4 for a 68-58 Viking final.
Jacob Roeth led the Vikings with 18 points while Wes Enis put in 15.  Devon Abshire and Nick Prince both scored 14, Noah King 4 and Connor Apple 3.  The Vikings were 6-19 from 3 point land with Prince going 4-6.  Apple and Roeth also converted 3 point shots.  Miami East was 24/59 (40%) overall from the field.  The Vikings were 14-21 from the line.  The Vikings out-rebounded the Pirates 36-35 and had 21 assists on the game.  King led the Vikings with 10 rebounds while Roeth led in assists with 8.
The Vikings are 9-2 and will travel to National Trail on Friday for a Cross County Conference game.  Riverside in now 3-8.
Miami East fans:  Continentalenews is located in North Creek Ohio and covers topics that are of interest of the Continental Area.  The continentalenews sports department will cover Viking games as their schedule permits.
Continentalenews readers: Jacob Roeth is the son of Head Coach Justin Roeth and the late Carrie Chivington Roeth.  Continental Alums Roxy and David Chivington are Jacob’s Grandparents.  A lot of members of the Continental area ask about the Roeth’s.
–Mike Jones, Sportswriter